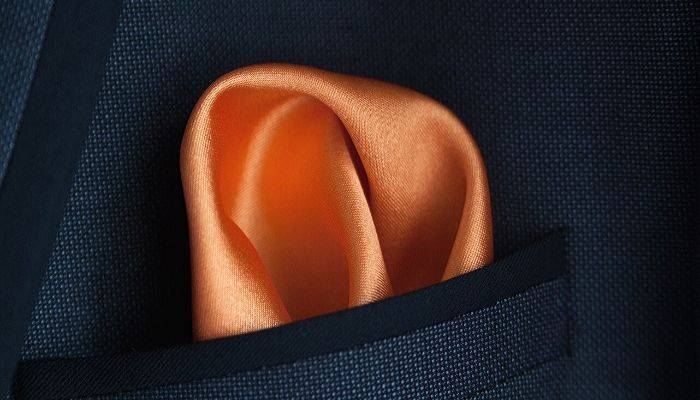 For a time, sporting a pocket square seemed like a dying art-form. Rising to prominence as a fashion accessory in the 1920s, the pocket square's popularity began to wane in the late 1960s. The pocket square may have nearly been gone, but it was never forgotten.

In recent times, this small, square piece of panache for the suit jacket, blazer and sport coat has seen a resurgence. It may not be the everyday accessory it was in the 1920s, but wearing a pocket square today sets you apart from the crowd like never before.

The straight fold is a simple, crisp way you can wear your pocket square. The finished product should be a small, clean rectangle rising just above the edge of your suit pocket.

Just lay the pocket square flat, bring the left edge to the right edge, then fold the bottom to the top without bringing it up all the way. Continue folding the pocket square in thirds horizontally until it is able to fit into your suit pocket.

This fold can also become the "rolled hem" if you simply put the pocket square into your jacket clean edge first, letting the hem peek out of your pocket instead of the clean edge.

The One Point Fold

The one point is another timeless classic. It's simple to execute but slightly more complicated then the straight edge. A well-folded point isn't just elegant; it creates the illusion of additional height in your torso area. It's an all-purpose fold that is perfect for more conservative suits or suits with thinner lapels.

To achieve a one point, fold the square into quarters, positioning it so the square looks diamond shaped. Then fold the left and right corners to the center. It's a good idea to fold the bottom up nearly three quarters length to add a bit of rigidity so the point doesn't droop. The finished product should look like a crisp triangle peeking out of your pocket.

For a reverse poof, follow the same steps but insert the square into your pocket upside down.

Because of its complexity and high degree of ornamentation, its best used at the most formal of events. Naturally, such a striking fold draws attention so employ it only when you're sure it won't upstage a guest of a honor like a groom or speaker.

Fold the square in half diagonally, being sure that the points don't quite meet. Pull the two ends up and over until they make four points and fold the edges to fit in your pocket. The key to any multipoint fold, whether two, three or four points, is that the lines are crisp and clearly distinct.

The puffed pocket isn't as crisp as its counterparts, but it's a unique change of pace and easy to pull off. This fold communicates a distinguished but more laid back attitude, without coming across as lazy. The steps toward reaching a perfect puff are relatively undemanding, but leave plenty of time for tucking and fine-tuning to achieve the most striking result.

Lay your pocket square flat and unfolded on the table. Pick it up from the center, pulling the square up to a loose point and bunching fabric toward middle as you go. Then simply slide in your pocket with only the peak visible. It's that easy.

For a reverse puff, follow the same steps but insert the square into your pocket peak down.

Now that you have a little guidance, fold away and experience all that a well-displayed pocket square has to offer!