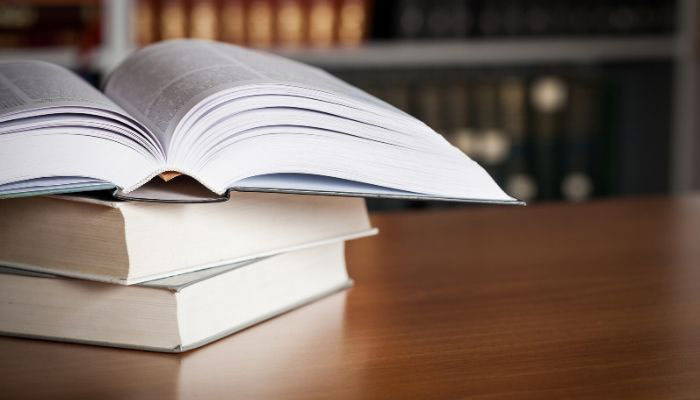 Ever wonder what a bolo tie is? Or the difference between a tie bar and tie chain? Here's a comprehensive guide to all that neckwear lingo.

A band collar bow tie is a pre-tied bow. The bow tie secures via an adjustable band that goes around the wearer's neck.

A bow tie with straight and flat ends that do not taper. Most commonly available as a self-tie style. Also known as a slim or straight bow tie.

This is an oversized version of the butterfly bow tie. It has the traditional bow tie shape, but in a larger size.

A bolo tie is a type of necktie typically made from a piece of leather cord. The tie adjusts and secures with an ornamental pin. Metal tips are common on the ends. This is a popular style of tie in western wear. The bolo tie is the official state tie of Arizona, New Mexico and Texas.

Another name for a bolo tie.

A style of tie that forms a bow around the neck. Bow ties can be pre-tied or tied by the wearer. Bow ties come in many shapes and styles.

The butterfly bow tie is the most common shape for bow tie. Think two isosceles triangles, tip to tip, with a knot in the center holding them together.

Suspenders that attach to pants with a button hole. Pants must have buttons sewn on the inside waist to be secured.

A pre-tied necktie or bow tie with a metal or plastic clip on the back that affixes to the shirt collar. There is no loop around the neck.

Not quite a skinny tie, but not as wide as a standard tie, a contemporary width tie typically measures 3.25-inches wide. This is becoming a popular business-appropriate width for millennials. It’s also common in uniform ties as it complements both men and women.

Another name for a crossover tie. Interestingly, while the name crossover tie is often associated with women’s uniform wear, a continental tie typically refers to southern gentleman’s formal neckwear. However, the ties are the same.

A crossover tie is a type of bow tie that is secured with a snap or button in the front. The two ends cross over one another, hence the name. Today, crossover ties are common for women’s or girl’s uniform wear, particularly with school uniforms. However, men can wear crossover ties, too. Elvis Presley is one of the most famous examples of a man wearing a crossover tie.

A pleated sash worn around the waist with a tuxedo or single-breasted dinner jacket. Cummberbunds are worn with a bow tie. (Fun fact, the pleats on a cummerbund are meant to be worn facing up. Back in the day, those pleats with used as small pockets to hold theater or opera tickets. They’re great for catching crumbs, too!).

A diamond-tip bow tie is a bow tie with angular lines, creating a diamond shape on the ends. These can be found in both pre-tied and self-tie styles

A necktie that is longer than a standard tie, typically recommended for big and/or tall body types as well as for tying more complex knots. While a standard necktie usually measures 57-inches to 58-inches, extra long ties are commonly available in 63- to 67-inch lengths, measured tip to tip.

A necktie that has a straight edge rather than a pointed tip and the end. Knit ties are the most common flat-end tie, and it is difficult to find a tie wider than 3-inches in a flat end.

A floppy bow tie droops vertically, rather than horizontally across. These are popular for women’s uniform wear, but men can wear floppy bow ties, too.

Another term for a self-tie bow tie.

A hemmed piece of fabric (typically cotton) carried in one's front or back pants pocket or inside coat pocket. This is used in place of a tissue. A handkerchief is not to be confused with a pocket square, that is purely for decoration.

The extra piece of fabric on the backside of a necktie used for keeping the tail in place after the tie has been tied. This is different than the tie label that would include the brand of tie.

A western style of bow tie consisting of a slim bow with hanging tie tails. Also referred to this as a string tie or southern bow tie. Colonel Sanders is the most famous example of a man wearing a kentucky colonel tie.

A lapel pin is a small ornamental pin worn on the lapel of a jacket. A flower or puff is the most common design.

Another name for an extra long tie.

Slightly slimmer than a standard necktie, a narrow tie measures 3-inches at the widest point. Like a contemporary width tie, this width is common in uniform ties because it complements men, women and most teens.

A novelty tie is a tie with iconic graphics, characters, cartoons or holiday images. These ties are typically very casual and may not be appropriate for all professional settings.

Another name for a pocket square. Pocket silks are made from silk rather than cotton, polyester or other materials.

hemmed square of fabric used as a decorative accessory in a suit pocket. Pocket squares do not have to match the necktie or bow tie, but should coordinate. There are a number of ways to fold a pocket square.

A pre-tied tie is a bow tie or necktie that comes already tied and is fastened to the shirt collar with a clip, strap or band.

A less common style of bow tie that has rounded ends as opposed to the typical straight edges of a bow.

A self-tie bow tie is an untied bow tie that the wearer would tie themselves. The collar may be adjustable to fit the wearer’s neck size. Self-tie can also refer to an untied necktie.

A thin-width necktie, typically measuring 2-inches at the widest point. Depending on the source, a skinny tie may reference a tie measuring 1-inch to 3-inches wide.

Not quite standard, not quite skinny, but right in the middle. A slim tie measures 2.5-inches at the widest point.

A standard tie can refer to both length and width of a necktie. This is a tie that must be tied by the wearer and measures approximately 57- to 58-inches long. The width of a standard tie is between 3.5- to 4-inches wide. Today, 3.5-inches is the most common width.

Another name for a bolo tie.

The string tie has taken on several meanings over the years, but all refer to western wear. This may be another name for a bolo or kentucky colonel tie. It can also be type of bow tie made from a short and narrow single piece of material that is simply knotted to secure.

Leather, elastic or fabric straps worn over the shoulder to hold up trousers. The end of the straps contain either button holes or clips to attach to pants. Suspenders come in either an X- or Y-back style.

The narrowest end of a necktie. When the tie is tied, it is in the back of the tie and not visible.

A tie bar is used to clip the necktie to the shirt to prevent the tie from swinging and ensure it hangs straight. Tie bars can be worn towards the top or bottom of the tie.

A tie chain is used to hold a necktie in place. A metal clip attaches to the button of the shirt while a chain lays on top of the necktie. This is typically worn near the top of the tie.

Another name for a tie bar.

An untied necktie or bow tie that the person wearing would tie themselves. Sometimes referred to as self tie or freestyle.

The knot that is created when tying a necktie. There are 177,147 ways to tie a knot, the four-in-hand, windsor, half windsor and pratt knot being the most common.

A small decorative pin that attaches to the necktie. May have a small chain attached to a t-bar that is put through the buttonhole of a shirt to keep it in place.

A tulip bow tie is a style of women's bow tie that resembles a tulip. The center is usually adorned with a pearl-like bead. Common for uniform wear.

A tie that has a width larger than 4-inches. Though not commonly seen today, wide ties were popular in the mid 20th century.

A style of suspender containing two straps in the front that go up over the shoulders, meeting with one back strap that runs down the center of the back. Creates a y shape.

A zipper tie is a pre-tied necktie that, when worn, looks like a standard tie. However, a zipper in the tie tail allows the collar to quickly expand and fit over the head without having to tie a knot.